Black Cat in the Rue Morgue

The Black Cat
The Murders in the Rue Morgue

Black Cat in the Rue Morgue (モルグ街の黒猫,, Morugu-gai no Kuroneko?) is the ability of Edgar Allan Poe.

Black Cat in the Rue Morgue allows Poe to transport readers into the setting of any novel, though it must be one they are currently reading. People transported to the novel's setting can only return to the real world when they solve the mystery they are trapped in. The ability works regardless of any reading medium, such as a book[1][2][3] or a phone.[4][5]

Poe has written several mysteries that involve a story murderer; hence, people trapped in the novel may also be killed in the setting. Most often than not, the person killed in the novel would remain dead and is therefore unable to return to reality. However, some cases where an ally of said victim solves the novel can return both parties safely to reality, whether they are killed or alive in the novel.[1] However, Poe has also written novels that have safe settings to where targets can be transported[2] or can retreat.[5]

Aside from Poe, other people may also activate the ability; that is, they can transport other readers provided that a medium for Poe is presented by the other party. For instance, Ranpo Edogawa has utilized the ability using various books most possibly written by Poe during each moment of transporting targets.[2][5]

Black Cat in the Rue Morgue is a reference on two short stories written by the real-life Edgar Allan Poe, namely The Black Cat and The Murders in the Rue Morgue. The first story tells the story of a murderer who conceals his crimes but eventually reveals himself after being guilt-ridden.[6] The second story depicts the protagonist C. Auguste Dupin, considered as the first fictional detective who inspired the creations of Sherlock Holmes and Hercule Poirot, solving the brutal murders of a mother and her daughter in their home located in the fictional street named the Rue Morgue.[7]

See also: Images of Black Cat in the Rue Morgue 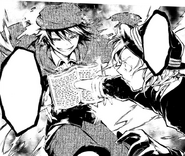 Ranpo and Chūya transported to a novel 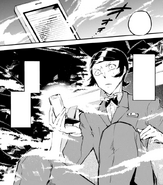 Mushitaro transported to a novel 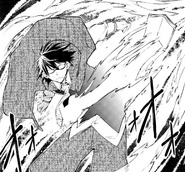 Ranpo retreats to a safe novel

Ranpo and Chuya being transported in the novel

Retrieved from "https://bungostraydogs.fandom.com/wiki/Black_Cat_in_the_Rue_Morgue?oldid=45321"
Community content is available under CC-BY-SA unless otherwise noted.