Ōgai Mori ("Caretaker")
Sees the whole Mafia as her family

Osamu Dazai and The Dark Era

Elise appears as a young, short girl with pale skin and bright blue eyes.  She has long, blonde hair, styled with straight, blunt bangs across her forehead and long, thick ringlets that curled past her waist.  She wears a large red bow on the right side of her head.

She wears a red dress with short, puffy sleeves and a frilled, white hem at the bottom.  Around the waist is a thin white band.  Her collar is white and buttoned, fastened by a pink ribbon. Below, she wears black and grey stockings with red Mary Janes.

When her abilities are activated, Elise's eyes become reptilian in nature. In combat, Elise wears a pink, elaborate, frilly "nurse" uniform. It is the same length as her typical dress, with long sleeves and plain white socks and black Mary Janes. The collar is fastened with a black bow, and she wears a nurse's hat, adorned with a bow in the upper left corner. Around her waist, she wears a black corset tied with a large black bow in the back. While the skirt is mainly pink, the middle is white, with two tiers of ruffles. 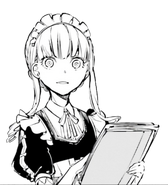 Elise during the Great War

On the surface, Elise is little more than a spoiled child. She's quick to throw fits when she doesn't get her way and has no regard for authority, let alone her elders. If something doesn't directly involve her, Elise approaches situations with a pointed nonchalance, almost always seen smiling or disinterested. The main way Mori can persuade her is by offering her sweets, as Elise has a large sweet tooth. She also enjoys drawing, appearing to do so often in her spare time.

At her core, Elise has a short temper and rather sadistic tendencies. Oftentimes Elise goes out of her way to inconvenience Mori for fun, such as sneaking off and hiding to make him worry about her. Despite spending her time playing with them, she exhibits little concern for the well-being of the Port Mafia's Mafiosi, even casually eating sweets and drawing when Mori confronts Higuchi over Akutagawa's failure and near-fatal condition. Nonetheless, she enjoys making them take her shopping or putting their hair up in different hairstyles, antics that even prominent members like Hirotsu and Chūya tolerate.

The truth is that her nature stems from Mori's own desires, being the manifestation of his ability, Vita Sexualis. This includes her preferences and resentment towards being ultimately subservient to Mori as his ability.

In the past, Elise acted with complete, almost robotic compliance for Mori, going as far as calling him "master", overall acting much less "human" than she does in the present. Her present personality now greatly resembles Yosano from her youth, indicating that at some point after Yosano's mental breakdown, Mori manipulated Elise into acting more like the younger Yosano. This explains her intense disobedience to him in the present. Despite being his ability, Elise is particularly difficult with Mori, as she's quick to tire of his obsessive nature towards her and unappreciative of his "doting" personality and the excessive amount of tailors and dresses he's bought her. Elise goes as far as admitting that she hates being made to save Mori when he's in danger. She's quick to insult and demean him, without any remorse.

Any trace of Elise's personality appears to vanish when Mori summons her for combat. During combat, Elise appears unblinking and vicious, emotionless against her opponents, a befitting nature for Mori's ability. Only after her defeat by Fukuzawa does Elise show any hint of fondness towards Mori.

Elise is the manifestation of Vita Sexualis, Mori's ability. As such, Mori's moods and desires largely affect Elise's nature as a "human", which becomes particularly evident when observing her past nature to her current. Furthermore, given Mori's "preferences", Elise does not age past the appearance of a young girl.

When Mori activates her powers, Elise can fly at high speeds. She summons a giant syringe, harkening to Mori's background as a military and underground surgeon, and fights with superhuman strength. When defeated, Elise does not "die", she disappears. Mori can resummon her, however, it's unknown if there's a specific amount of time he must wait before he can do so.

Although it is unknown when Mori manifested Vita Sexualis, Elise has been active since the Great War, acting as Mori's assistant. When asked to give a list of injured soldiers, Elise obediently agrees, showing that she wasn't always a headstrong, lively girl. However, at some point, Mori changed Elise's personality to be more like Yosano's. This likely occurred after Yosano's mental breakdown left her catatonic, with Mori changing Elise to "replace" Yosano, hence her difficult and stubborn nature towards Mori in the present.

Elise fights against Fukuzawa after the latter learns of Mori's attempts of manipulating Yosano even after she's mentally broken under his thumb. The results of the battle are unknown, but it's likely she was defeated by him. [1]

During Mori's recruitment of Dazai and Chūya, Elise is absent.

Although largely uninvolved during the Port Mafia's feud against Mimic, Elise sees Oda when he's summoned by Mori. She's seen vehemently refusing to continue playing dress-up, dozens of dresses strewn about the office. Here, Elise comments that she detests Mori's desperate and needy behavior, harshly refusing any of the dresses offered.

Retrieved from "https://bungostraydogs.fandom.com/wiki/Elise?oldid=41981"
Community content is available under CC-BY-SA unless otherwise noted.