Gasp of the Soul

Gasp of the Soul

Gasp of the Soul (魂の喘ぎ,, Tamashī no Aegi?) is the ability of Teruko Okura.[1]

Gasp of the Soul allows Teruko to manipulate the age of anyone she touches. Teruko herself mainly uses her ability for interrogation and torture, with the ability allowing her to rapidly age someone to old age and cause them to develop several illnesses and maladies normal to old people before rapidly pulling them back to a much younger age. As such, this would inflict a severe psychological strain on her victims' senses and severe damage mentally due to how quickly she alters their age before they can acclimate to the new sensation and feelings of their rapidly changing bodies. Hence, this makes her ability ideal for interrogations without actually "hurting" her victims. Moreover, Teruko can use her ability on herself, allowing her to alter her physical age for both disguising herself and to mature her body to a more physically stronger age. Aside from aging other people, she can also age down others, such as when she turned Michizō Tachihara into a toddler. Similar to how her ability is activated, Teruko can later revert her ability's effects upon touch.[2]

The ability is based on the real-life Teruko Ōkura's work Gasp of the Soul (魂の喘ぎ,, Tamashī no Aegi?), published in 1947.[3][4] The story tells the mysterious events in an auction of a certain clan's heirloom, a deceased mother's final letter that states how she had been making artificial bodies to maintain her youthful appearance until her death, and the disappearance of the clan's sole heir.[5]

Teruko as an old lady 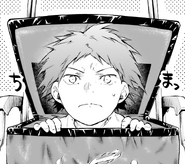 Tachihara turned to a toddler

Retrieved from "https://bungostraydogs.fandom.com/wiki/Gasp_of_the_Soul?oldid=37699"
Community content is available under CC-BY-SA unless otherwise noted.