Mark Twain (マーク・トウェイン,, Māku Tōein?) is a former member of the Guild, and his ability is Huck Finn and Tom Sawyer.

Twain has dark orange hair which is swept outwards and green eyes. He wears a long white sleeve shirt with buttons that are always undone and black pants with the suspenders down. He wears black sandals and black bracelets around his ankles. On his left wrist are two brown bands.

Twain is generally a jovial and cheerful individual, in contrast with most of his fellow Guild members. As such, he would usually suggest that they go on excursions to spend some leisure time when given a chance altogether,[3] but they would simply reject his idea in the process. Nonetheless, he is quite close with them until the organization's eventual dissolution, considering the Guild to be a rather nice place.[4]

As one of the Guild's snipers, he takes considerable pride in his marksmanship and ability, wherein he keeps a personal record of his endeavors that utilize such skills in his "success diary". Twain would also frequently dote on his doll-like companions Huck and Tom for their skillful marksmanship.

Despite this lighthearted attitude, Twain can become serious at times during combat, especially when dealing with an opponent who challenges his sniping skills like Atsushi Nakajima, whom Twain has admitted to be the strongest adversary in his success diary.[1] In spite of his confidence in his own skills, it is not impossible for Twain to acknowledge his opponent's expertise. Hence, he easily and amicably accepts defeat when he is apparently bested by such adversary.

With his ability, Twain can shoot with absolute accuracy by attaching either Huck or Tom to one of his bullets. Since Huck's and Tom's minds are also linked, he can perform long-distance surveillance using them. 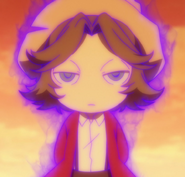 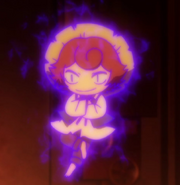 Little is known about Twain, and his life before his membership in the Guild nor his reasons for joining it are not specified. However, it is quite possible that he has worked on his success diary for quite some time, most likely having started it back in his hometown.[3]

Twain first shows up along with Howard Phillips Lovecraft, John Steinbeck, Nathaniel Hawthorne, Margaret Mitchell, and Herman Melville during the fight between Kōyō Ozaki and Atsushi Nakajima with Kyōka Izumi.[5] Later, as the three-way war rages on, Twain acts as a sniper shooter who shoots Atsushi and Kyōka in order for Francis Scott Key Fitzgerald and Herman to kidnap Atsushi.[6]

After Atsushi escapes from the Moby Dick, Twain acts as a sniper to prevent him from landing safely to Yokohama using his ability. Though successful in puncturing Atsushi's parachute on his way down, the latter fully transforms into a tiger, which allows him to land on the ground unscathed. Twain continues to attack him with a barrage of .50-caliber bullets, but Atsushi manages to evade them all. Twain then prepares to shoot him once more, but Atsushi almost vanishes due to his quick speed before Twain can even fire.

Surprised with Atsushi's incredible endurance and reflexes, Twain turns serious and shoots a tanker truck in front of Atsushi, heavily injuring Atsushi from the blast. He then rains down a surge of shots at Atsushi and immobilizes him. Twain declares the end of their battle, deeming Atsushi as his greatest adversary in his "success diary". However, Osamu Dazai intervenes, nullifies the curse by touching Q's doll, and sets off a saturation chaff smokescreen that jams Twain's infrared sensors and radar. Acknowledging how his opponents placed their trust in each other that yielded to their true victory, Twain jovially admits his defeat.[1]

After evacuating the Moby Dick, Twain escorts and bickers with a captured Lucy Maud Montgomery out of a helicopter after she helped Atsushi escape. As they turn to Louisa to ask for their next course of action, Twain suggests they all go to the karaoke, only for Lucy to stomp his foot in response. Later, he leaves together with Steinbeck, Louisa, and Lucy to avoid getting caught in the fall of Moby Dick.[3]

Following Fitzgerald's defeat, Twain and the other Guild members discuss the fate of the Guild. Twain remarks how the Guild was once quite a great place, after which he asks Louisa and Steinbeck what they shall do. As Steinbeck plans to quell the internal strife among the remaining Guild forces, Twain gets shocked with his decision, knowing that Steinbeck used to hate Fitzgerald. In the end, Twain chooses to return home in order to finish his autobiography. They then encounter Lovecraft, who mutters about his finished "contract" before jumping off the ocean to sleep.[7] In the anime, Twain wonders what Lovecraft really is, to which Steinbeck remarks that he was one of his few friends.[8]

Retrieved from "https://bungostraydogs.fandom.com/wiki/Mark_Twain?oldid=42100"
Community content is available under CC-BY-SA unless otherwise noted.