The past, Teruko Okura's unreasonable requests[3]

Ben Diskin
Michizō Tachihara (立原 道造,, Tachihara Michizō?) is the fifth and final member of the Hunting Dogs special units,[1] operating undercover as a Port Mafia mafioso and Black Lizard battalion leader. Later, he serves as a double spy for the Mafia on Ōgai Mori's orders.

Tachihara is a slightly imposing young man with short, spiky hair dyed rust red and amber eyes. He wears a plaster on the bridge of his nose. His natural hair color is black.

His normal outfit consists of a long-sleeved and rather baggy white V-neck shirt with the border being black and the left sleeve rolled up so it isn't visible. This shirt is partially covered by a military green crop jacket that has beige fur around the collar. Underneath, he wears a gun strap for his dual guns. He also wears dark blue pants, brown boots, and a black band on his left wrist.

As a member of the Hunting Dogs, he is seen wearing the standard Hunting Dogs cape and cap, alongside his usual long-sleeved shirt, pants, and his late brother's dog tag. 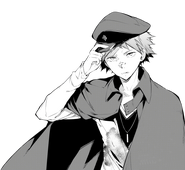 Tachihara as a member of the Hunting Dogs

On the surface, Tachihara is an arrogant, impulsive, rash individual, more than willing to solve problems through sheer brute force and his dual guns. A violent temper leads to frequent conflict between him and other mafiosi, namely Gin, whom Tachihara views as creepy and frequently insults, leading to arguments, and Hirotsu, who often shuts Tachihara's temper down by threatening him. Tachihara's self-preservation prompts him to obey Hirotsu in the end, albeit reluctantly.

An apparent thirst for battle and arrogance fuels Tachihara's temper. He's often seen with a rather feral smile on his face whenever fighting. He seldom considers the weight of a mission over the rush of eliminating his targets. He shows no hesitation nor remorse in murder, in fact sometimes urging to just eliminate a troublesome person if he finds their baggage more than they're worth.

A prideful man, Tachihara despises being underestimated and belittled. This is a surefire way to get oneself shot.

His rebellious side doesn't negate how he values orders, seeing them as an utmost system. Due to this, he attempts to dissuade Higuchi from saving Akutagawa against Mori's orders, even suggesting an alternate plan that wouldn't disobey these orders. Furthermore, he maintains his composure when dragged into shopping with Elise, and tolerates her putting bows in his hair. Despite guards laughing at him, Tachihara doesn't snap.

Despite his rough exterior, Tachihara is capable of thinking rationally, just not in the heat of the moment in the Port Mafia. He can recognize danger quickly and finds himself on edge over how nonchalant Mori, Kōyō, and Chūya's meeting went. Tachihara has a proficient understanding of how to deal with the enemy, alluding to a much more cunning side of his true nature.

Much of Tachihara's details of joining the Port Mafia are unknown, however, it is a ruse. His identity as the fifth Hunting Dog reveals a much more clever, driven man. Unlike Ango Sakaguchi, Tachihara always intended to infiltrate the Port Mafia, using his position in the Hunting Dogs to operate as a spy. His confrontation with Yosano is devoid of any rage, depicting a cold, blunt side as he explains his grudge against her for "killing" his brother.

Regardless of who he is working for, Tachihara cares deeply for his comrades. He was first to try to stop Higuchi when she tried to save Akutagawa on her own and has been seen visibly harboring guilt for when he cut down Hirotsu and Gin for the sake of his mission as a spy. He has also been seen caring for Teruko when she showed she was heavily injured from going against a plane head-on. He's also notably patient with those who are spoiled, including letting Teruko sit on her shoulders with little protests of being her "slave" and letting Elise put a bow on his head.

Beneath a lot of Tachihara's rough and punk-like exterior is a strong sense of incompetency and inferiority compared to his elder brother who was praised as being "perfect" while he was deemed by his family as being inferior, even being questioned as to why he didn't die instead of him. These things have driven Tachihara to act out and live a life of delinquency and ruthlessness by affiliating with gang activity, but despite these things, he still couldn't shake off these negative feelings. His insecurity and desperation to escape his brother's shadow was so strong, that Tachihara took on the first "order" that allowed him to become someone "not like his brother or his opposite" and joined the Hunting Dogs and infiltrate the Mafia to get revenge on Yosano for "killing" his brother, even when he knew and acknowledged that all of it was an excuse to appease his own negative feelings.

He has the ability Midwinter Memento (真冬のかたみ, Mafuyu no Katami, Midwinter Memento?) which grants him ferrokinesis, the ability to manipulate metal. It allows Tachihara to remotely control any metal object, mainly his Hunting Dogs blade and his guns. His prowess can even move a mannequin-like a human, and the weapons he controls all float. It has also been mentioned by Teruko that his Ability is useful for stealing, altering information, and also for assassination, which makes him someone who is "born to be a spy".

As a Hunting Dog, Tachihara underwent intensive training and experimentation, making him physically stronger and more durable than an average human and Ability user, however unlike his fellow Hunting Dogs, he is unable to withstand or counter strong attacks (e.g. jet plane), because he had a weaker version of the strengthening surgery due to his status as a spy.

Retrieved from "https://bungostraydogs.fandom.com/wiki/Michizō_Tachihara?oldid=47596"
Community content is available under CC-BY-SA unless otherwise noted.