Brainwashing, subordination, having no freedom[1]

Gogol has white layered, sharp hair swept to the left side of his face. However, as short as it seems, he also has a long braid of hair that often rests on his right shoulder. A scar is slit vertically down his left eye. Compared to his left eye, his right eye appears vacant, bearing no highlights in it, indicating he may be blind in it.[2] Over his right eye appears to be a card-styled mask or eye patch. Gogol's attire is just as eccentric as his personality and closely resembles a circus ringmaster. He wears a mostly black jacket, the right side being solid black, black-and-white striped trousers, a shirt with a ruffled, round collar akin to a loose elaborate turtleneck, and dark gloves. He completes the outfit with a top hat with a diamond pattern. 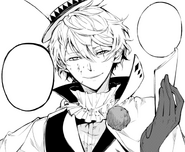 Gogol is sadistic and loves to speak in great theatrics. One of his main traits is his tendency to pose questions (oftentimes rhetorical threats) as "quizzes". He is also skilled in disguises, deceiving Tonan as his secretary.[3] Whilst fighting Atsushi Nakajima, Gogol depicts great joy in fighting and tormenting him, going as far as to capture Atsushi's leg in his coat and leaving it in a separate space on the floor.[2]

Gogol hints that his eccentric persona may or may not be real. The side of him feeling no remorse in murdering others is just as real as the side that feels guilt, well aware of how wrong and cruel his actions are. He claims to want to soar as freely as birds do. Nonetheless, both sides appear evident. However, even if he does feel guilt, he acts as if he bears no hard feelings towards Fyodor Dostoevsky, whom he nicknames "Dos".

Gogol's ability, The Overcoat (外套,, Gaitō?), allows him to use his coat to manipulate spaces and what comes out of them. That is, it acts largely like a portal, capable of relocating and moving objects. He can use this to make his hand and gun appear in a space completely unrelated to him or manifest a pillar. The ability works on living things as well. He uses it to 'sever' Atsushi's leg from his body, trapping it on the floor. Its maximum effect connects 30 meters.[1][2]

Gogol disguises himself as a police officer who shoots the driver Mushitaro Oguri is in. He then introduces himself in the form of a quiz and states that he has come to clean up messes. He further explains that his job is to eliminate anyone who knows the Decay of Angels' next course of action, five people who will announce the demise of the celestial world.

Later, when Tonan holds a secret meeting with various government officials, Gogol disguises himself as Tonan's secretary and hands him the documents regarding Yukichi Fukuzawa's connection with the assassination of war hawks towards the end of the Great War, as well as the list of his targets. Tonan asks him to arrange a meeting with the informant, upon which Gogol summons a revolver afar using his ability and shoots his leg. Discarding his disguise, Gogol quizzes Tonan on why he spared his life, only for him to answer his own question and revel in the Armed Detective Agency's connection with the Decay's scheme.

Gogol appears with his hostages, who are high-rank government officials bound in a body-cutting machine. He then gives the Agency four pieces of information: (a) when the times comes, the government officials will be cut into two; (b) if the other people aside from the Agency members attempt to interfere, the chainsaw will start automatically; and (c) the chainsaw will be activated precisely at 6 p.m., approximately 30 minutes away. Remembering that there is no fourth thing, he orders his cohort to turn the camera off.

While Atsushi sneakily goes to the mansion where the hostages are held through the evacuation route, Gogol shoots him from the back, which Atsushi manages to avoid. Atsushi then asks if he is one of the terrorists, to which Gogol replies with his name and tells him his ability, an object transfer-type ability. Atsushi attacks Gogol, but the latter manages to take out a gun, which Atsushi stops by using the fangs of the tiger. Gogol then uses his ability to take out a large telephone pole to attack Atsushi. While Atsushi is injured, Gogol then uses his ability to make Atsushi's legs come from his coat, sealing the latter's mobility.

Atsushi asks Gogol his reason for killing people in cruel ways, to which Gogol responds with two answers. First, as he stabs Atsushi's leg from his cloak, he says that it is fun for him. He then says that such reply is the one for his victims. Gogol then tells Atsushi the "real answer", in which he states that he is completely sane and understands the evil of murder and feels guilt like other people. However, he seeks the perfect freedom, which compelled him to join the Decay of Angels, with Fyodor as the only one who understands him. However, he reverts his statements and advises Atsushi not to believe a clown's words. He then leaves Atsushi's leg stuck on the floor from his coat and disappears.

Gogol surfaces at the hostage site and asks Tonan his thoughts before saying goodbye to his lower body, to which Tonan replies that he will destroy him. As thanks for his help over the last six months, Gogol tells him that he will only save him, offering him a device to call for rescue. After a while, the Agency members arrive at the area. Though there are still five minutes remaining, Gogol orders a hooded subordinate to press the button that activates the chainsaw. He then proceeds to tell them to take off their hoods, just as the machine starts to cut the bodies of the other government officials.

After taking off the hoods, Gogol chuckles at the side, witnessing the Agency members being revealed as the hooded hostage takers inside the site despite not yet breaking down the door. With the Agency members surprised at the situation, they find Gogol tied up on a chainsaw chair, who tells them that they are avatars of justice as opposed to the purely evil Decay of Angels. Stating his desire for freedom of his soul, the chainsaw on Gogol's seat activates; he pleads that he does not want to die and asks Tonan for help. Eventually, as Gogol's body is cut in half, Tonan informs the military that the Decay of Angels is the Armed Detective Agency.[2]

Some time later, the Hunting Dogs are dispatched to the Sky Casino, which ends up with Sigma – the casino's manager and a Decay of Angels member – falling from the floating establishment. As Sigma nears his landing, Gogol awaits for him at the ground, preparing for his "Revival-From-Death" Magic.[4] Later, Sigma wakes up at the sight of Gogol, who explains how he rescued him by using his space connection ability to lower him little by little until reaching the ground. Sigma then asks Gogol why the clown rescued him and, knowing that Gogol should have died during the hostage operation as part of their plan, how he survived. Gogol tells him that he created a gap with his ability to replace someone else's torso in said gap, allowing him to fake his death.

Sigma finally asks him his motive for not sticking to the plan of having him truly killed ever since the beginning, which was Gogol's desire in the first place to achieve true freedom. Gogol replies that Fyodor is indeed the one who truly understood him and hence considers him as his friend. However, Gogol realizes how he can be truly free from his "brainwashing" if he kills his friend, asking Sigma to use his ability to read Fyodor's ability.[5]

Retrieved from "https://bungostraydogs.fandom.com/wiki/Nikolai_Gogol?oldid=42985"
Community content is available under CC-BY-SA unless otherwise noted.