Plum Blossoms in Snow allows Tetchō to extend his saber for long distances and bend it at will, which makes it difficult – if not impossible – to outrun its length and span.[2] In addition, it can cleave an entire vehicle into two from a far distance[3] and even penetrate the walls of a helicopter flying at a high altitude from the ground.[2] As a result, Tetchō is regarded as the strongest Hunting Dog in terms of pure fighting prowess.[1][4]

The ability is a reference to A Political Novel: Plum Blossoms in Snow (政治小説・雪中梅,, Seijishōsetsu: Setchūbai?), which was written by Tetchō Suehiro in 1886. The novel became the influence of Liang Qichao's novel titled Future of A New China. Told from the perspectives of an unnamed host and an unnamed guest in 2040 Tokyo, the story follows their discussion on the power and wealth of Japan, particularly the lives of three individuals – Motoi Kunino, Haru Tominaga, and Hyōsui Kawagishi – and their involvement in the politics of Japan sometime during the Meiji period.[5] 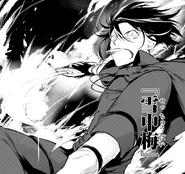 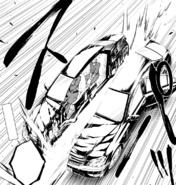 Tetchō cleaves a vehicle into two

Retrieved from "https://bungostraydogs.fandom.com/wiki/Plum_Blossoms_in_Snow?oldid=45071"
Community content is available under CC-BY-SA unless otherwise noted.