The Grapes of Wrath

The Grapes of Wrath

The Grapes of Wrath (怒りの葡萄,, Ikari no Budō?) is the ability of John Steinbeck.[2]

The Grapes of Wrath allows Steinbeck to grow grapevines from any part of his body by planting a seed onto such part. By grafting the vines attached to his body to other plants, the flora in the entire vicinity can also become an extension of his body, allowing him to sense his targets nearby such extensions. His own branches and those from the flora can also be used as a means for capturing and holding a target with tremendous strength and to shield himself from enemy attacks. The grapevines can tightly restrain targets in place, such as people, objects,[1][3] and even manifestations of abilities. As such, Steinbeck's grapevines are considered as a countermeasure against Lucy Maud Montgomery's Anne, which has been successfully restrained even in her own dimension.[4]

The ability can also be used for monitoring and stealth purposes. For instance, Steinbeck was able to listen to the conversation between Francis Scott Key Fitzgerald and Louisa May Alcott by touching a tree he was perched on, whose roots were implied to be connected to some plants near Fitzgerald's and Louisa's location.[5] Furthermore, Steinbeck can also apparently use his grapevines as a cast for his injured limb.[6]

Steinbeck can also combine his ability with Kyūsaku Yumeno's cursing ability, which is a tactic that the Guild primarily utilized in their emergency plan. Because Q's ability is to curse people who hurt them, Steinbeck used his grapevines to connect the plants directly into Q's body, affecting their sense of touch. Thus, when a person harms a plant in any way, it directly hurt Q, which caused the person to get cursed. Given that Steinbeck connected his grapevine roots to all the trees throughout Yokohama that received all sorts of painful treatment, such as being stepped on or being cut down, an estimated one-fifth of the population was cursed with Q's ability.[7]

As a drawback of the ability, when anyone attacks Steinbeck's grapevines while his ability is activated on himself, he is also affected and pained in the process.[1] Moreover, like all other abilities, Osamu Dazai can easily nullify Steinbeck's ability with a single touch.[8]

The ability is a reference to The Grapes of Wrath by John Steinbeck in 1939. It is a realist novel set during the Great Depression about the Joads, a poor family of tenant farmers driven out of Oklahoma because of drought, economic hardship, agricultural industry changes, and bank foreclosures, forcing the family out of work.[9] 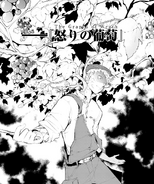 The Grapes of Wrath as depicted in the manga

Steinbeck's grapevines growing out of his neck

Steinbeck creates vines from his palm

Retrieved from "https://bungostraydogs.fandom.com/wiki/The_Grapes_of_Wrath?oldid=41962"
Community content is available under CC-BY-SA unless otherwise noted.