Vita Sexualis (ヰタ・セクスアリス,, Wita Sekusuarisu?) is the ability of Ōgai Mori. Elise is its manifestation.[1]

Vita Sexualis allows Mori to summon and configure Elise's personality in any way he wills. As such, he can make her levitate, chase after an enemy at high speed, and make her save him from imminent peril by manipulating Elise as his ability. Moreover, he can notably summon Elise having a medical semblance and make her attack his opponents with a barrage of large medical equipment.[2]

Although Elise is powerful, Vita Sexualis apparently requires Mori's strength and energy. As a result, when infected by Alexander Pushkin's virus, summoning Elise takes a toll on the ability herself. In their battle, when Fukuzawa cut her down, she gets dismembered and eventually dissipates. As Mori's ability, Elise does not die, but it takes time and energy for Mori to resummon her.

Elise has shown her displeasure in Mori's ability in which she stated he always gets to "set the scene" and make all the decisions.[3] Yukichi Fukuzawa also describes Mori's ability to be quite repulsive.[2] When Vita Sexualis was separated from Mori during the fog incident caused by Tatsuhiko Shibusawa, Fukuzawa did not hesitate to quickly strike it down, calling both the separated ability and the real Elise to be a fiend regardless of the situation.[4]

In the midst of the Great War, Elise used to be more subservient and borderline emotionless as Mori's ability. However, sometime after the war following Akiko Yosano's mental breakdown, Mori configured Elise to mimic the young Yosano's defiant personality, showing Mori's deep-seated obsession towards Yosano, whose stubborn nature Mori particularly fawned over during the war.[5][6] 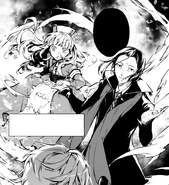 Vita Sexualis as depicted in the manga

Vita Sexualis activated to save Mori from the car explosion

Retrieved from "https://bungostraydogs.fandom.com/wiki/Vita_Sexualis?oldid=41700"
Community content is available under CC-BY-SA unless otherwise noted.